Living in a bit of a “VHF hole”, I often experience a characteristic “flutter-fading” during my contacts from home on 4 m (FM). Aircraft reflections seem to be the main cause (indeed, I can often hear or see them flying over at the time).

Back in October 2005, I used DL4YHF’s excellent Spectrum Laboratory program to record some spectrograms of signals received from the GB3ANG beacon on 2 m. This beacon cannot be received directly at my QTH (due to Winter Hill to the North), but the plots clearly showed the Doppler-shifted reflections from a number of aircraft in flight.

I’ve repeated the experiment on 4m: an example is shown below, and more can be seen here. 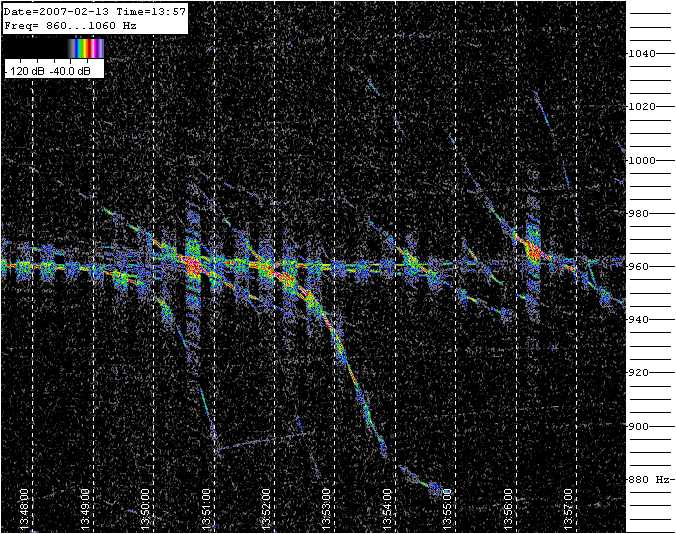 The plot shows time on the horizontal axis (a ten-minute interval) and frequency vertically (a 200 Hz range). The amplitude of the signal is illustrated by the colour, as shown in the inset (reds and yellows are louder than blues and greens).
Each aircraft produces a reflected signal which is initially shifted high (in frequency, and on the graph) as it approaches, and then low as it recedes.
When two or more signals are close in frequency, their combined amplitude rises and falls, according to the phase of their addition.

Listening to these signals as I recorded them, it was clear that the variable fading I could hear was in fact a “beat” between the two strongest frequency-shifted signals. As the signals converged in frequency, the fades got progressively slower and deeper, and as they diverged, the fades got faster and smaller.
I was beaming North with a 2-element (Moxon rectangle), and the beacon transmitter uses a 3-ele pointed just East of South.

On 4m FM, I believe that the flutter which I often hear is again a beat, this time between a weak scattered “direct” signal, and a variable Doppler-shifted aircraft reflection of similar strength.
The envelope of a typical fading signal is shown in the graphic below:

This shows the received signal envelope (i.e. S-meter reading) against time. As the fading rate slows, the amplitude of the fades increases, but once the rate reaches zero, these trends reverse. A typical episode lasts for under one minute.

The effect is illustrated in this sound clip (159kB file, mp3 format). The flutter fading is evident over 30 seconds of this 40-second sample. The fade rate can be heard to slow down and then speed up again, just as the fade depth peaks and then decays.

I have heard the same effect on 6 m, 2 m and 70 cm, but it certainly seems more marked on 4m. Maybe the aircraft are better reflectors at 70 MHz, or it could just be a consequence of me making more frequent (and more distant) contacts on 4 m than on the other three bands?

Another consequence of this effect is that since the aircraft reflections must be as stong as the scattered direct signals (otherwise the fades would not be so deep) this means that in the absence of direct paths (due to nearby hills), an aircraft reflection on its own would be sufficiently strong to sustain an (albeit brief) FM contact. In this instance, there would be no fading, just a single (frequency-shifted) signal which would come and go as the aircraft flew over. The frequency shift would not be detectable on FM: you would probably just hear the signal rise and fall from the noise-floor.

Using FM and omnidirectional aerials, these effects are noticeable over ranges of a few tens of kilometres, but with SSB and beams, they could be useful much further afield. The aircraft reflections will provide short-term enhancements to tropospheric forward-scatter over paths of hundreds of km.
I believe that the contacts I’ve had with GM4AFF at 350km have all been via this mechanism.