(This page is out of date and requires update – volunteer?)

The most popular way of operating multimode on 4 m is by using a ‘transverter’. A transverter is simply a device which allows a transceiver designed for one amateur band to be used on another. Unfortunately most of the latest HF transceivers don’t offer transverter facilities unless you are prepared to modify them yourself.

Experience has found that some of the older ‘Trio/Kenwood’ transceivers such as the TS830S, TS430S, TS930S and TS940S are excellent as ‘prime movers’ for transverters. These provide all the interconnections on one 8 pin DIN connector and make for a convenient and professional installation. The TS430S in particular is particularly good in that when changing mode from CW to USB the transceiver changes frequency slightly so that a readable CW tone is received and not zero beat like most transceivers. This is useful on 4 m as there are often either cross mode or changing of modes mid-QSO for the long haul contacts where QSB is often present.
The Icom IC735 is also particularly good for transverting, as it offers a low-level transverter drive output.
The Kenwood TS2000 has a transverter facility which allows display of the transmitted frequency. Minimum power output of 5 W is automatically switched in when using this feature. There is also a separate receive input which can be used to avoid a relay to switch between receive and transmit chains.
The Yaesu FT817 has a maximum power of 5 W, which can be set to even lower levels. This set can provide outputs at 28 or 144 MHz.

Tony, I0JX has modified a Ten-Tec 6-metre transverter kit (which costs around 120 US dollars) to the 4-metre band. The project is described on Tony’s website.

Microwave Modules of Liverpool were 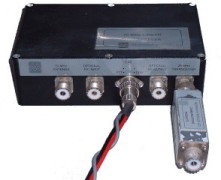 well-known in the 1980s for their amplifiers and transverters. Many of these are still working, and appear on the second-hand market – check the dealers, or RadCom members’ ads. These were constructed inside a compact Eddystone diecast box with either BNC or SO239 sockets for RF interconnections and a 5-pin locking DIN connector for DC and switching connections. Models were produced for use with 144 MHz transceivers as well as HF transceivers using a 28 MHz IF. They have been proved to be quite robust units over the years with many proving useful for both portable and home station use. They produce around 10 W output and are suitable for all-mode operation.
The input power required to drive these units is around 300 mW: they were originally supplied with an external 15 dB power attenuator (as shown in the photo), which dropped the output power from a 10W transceiver to a suitable level.
The same company produced some new models in the mid-1990s, which are reputed to have a much better performance than the originals.
Dave G4FRE has set up an archive of MM circuit information.

RN Electronics also produced transverters for the 4m band although these too are no longer available new. They were very similar in size and concept to the Microwave Modules devices and were also produced with IF’s suitable for both 144 MHz and HF transceivers. They were generally better than the Microwave Modules types in that some models gave 25 W output and the receive sections were a little quieter. They are very rare on the second hand market however as very few were manufactured but again RadCom members’ ads may turn one up.

Mutek produced a nice dual-band transverter for the 50 and 70 MHz bands with 25 W output. They produced versions for 28 MHz and 144 MHz IFs but were quite expensive when new, but had a reputation for superb RF performance.

In the mid-1980s, Practical Wireless magazine published a design by G4DDK and G4HUP for a 70 MHz transverter called the Meon. The design was straightforward and many people use Meons with success on the band. Again the design catered for use with an HF Transceiver using a 28 MHz IF. RF output is quite low at around 1 W.
Paul M0EYT has been searching the Internet for Meon articles, and has created an archive of them here.

In 1995, the Andover Radio Club ARAC produced a set of kits for a single-board low-power 70 MHz transverter for either 10m or 2m IF. Originally developed as a Club project, the remainder were advertised via the Four Metres News at the time. Brian G4NNS has published details of this project here.
G6GVI/P may be heard using one of these on most Sunday mornings, and this project was also adopted in 2004 by the South Bristol ARS for their Intermediate Licence course.

Sam G4DDK designed a very high dynamic range 10 m to 4 m transverter which included a 17 dBm diode-ring mixer and highly selective filters. Kits for this were available from Hands Electronics, but sadly these have been discontinued.