A comparison of commercial 4m verticals

Description
The Watson WVB-70 is a budget half-wave-end fed vertical for the 4 metre band. As is shown in the picture, this aerial has four sections, the lower three being pre-assembled by the manufacturer. The total length when assembled is around 2.03m, and no ground-plane radials are required. This aerial is available from several traders for about £40.

The lowest section is a metal tube, 27mm in diameter and 240mm long. This is the part where the supplied clamp attaches the aerial to the stub mast or pole, and it includes the connector, an SO239, at the base. Incidentally, the DC resistance between the innner and outer of the co-axial socket measures around 2 ohms.

In discussion with the manufacturer, they gave me the advice that if the aerial is fixed to a metal mast, the top of it should not overlap the fibreglass section of the aerial, as this has a detrimental effect on V.S.W.R. No mention of this fact is made in any of the packaging or any manual with this aerial.

The next section is a 25mm diameter fibreglass section 435mm long, which houses a coil connected to the SO239. Into the top of this is fixed the next section, which is a 14mm diameter alloy tube 530mm long. In my example, this joint was not quite concentric, however I feel this would not cause any problems.

The final section is another alloy tube 9mm in diameter. This slides into the section below, and is secured with a clamp with a tab for finger tightening. Sliding this section in and out allows adjustment of the antenna tuning. On mine, the measurement from the centre of the tab to the top of the aerial (having removed the black end-cap) was 820mm. The total measurement from end to end was then 2030mm.

Installation
The top section adjustment was made for minimum V.S.W.R. (1.1:1) with the antenna at a height of 2.75m, however when installed at roof height, the V.S.W.R. had risen to 1.4:1. It was impractical for me to make further adjustment in situ, but I suggest that if possible, enlist the help of another friendly ham to measure the V.S.W.R. as you make the adjustments – it saves all that messing about.

Conclusion
My example failed to impress me with its build quality, but the
aerial does the job, with good reports received on air. However, rain did find its way into the lower sections and the coil, causing the V.S.W.R. to rise to 2:1. I then had to bring the aerial down, and hang it upside down to drain the water out. I have subsequently added some extra waterproofing around the joint between the top two sections, using epoxy adhesive and a rubber boot (see picture), and it is now back up and functioning well. Even during November’s icy conditions, the VSWR remained constant. It has stood up to the 35mph winds we have had with no damage or sway noted!

Description
This is an Italian-made aerial, one of a large range of commercialapplication aerials used by local authorities etc. and this version is ideal for the radio amateur on 4 metres. This aerial retails for around £40.
This aerial is just over 3m long, and is of aluminium construction in three main sections, and claims a gain of 2dBd (4.15dBi). It is rated for 500 watts maximum power input and the V.S.W.R. is 1.2:1 at the resonant frequency. The weight is 1.6kg without cable, and it claims to withstand winds of up to 90mph. No ground planes are used on this aerial. 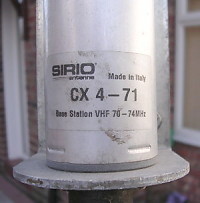 The bottom section is a 1000mm long alloy tube 45mm in diameter, which houses the coil and a gamma-match. The SO239 on the base is a good-quality socket with a plastic shield to prevent water trickling into the mating PL259. At the opposite end is a threaded bolt into which the next section screws.

Installation
This aerial was tuned on an alloy pole at a test height of 10 ft, since it is very difficult to tune the top section of a vertical like this on the roof of the house! The starting point (indicated by a red mark on the tube) was to have 720mm of the top section protruding above the Allen screw. After adjustment, the V.S.W.R. was 1.2:1, and the total length of the antenna was 3020mm. I added a rubber boot over the locking screw, as shown in the Watson review above.
The aerial was then mounted to a short mast secured to my rotator, and using an Ascom 550 at 30 watts, the V.S.W.R. was measured at 1.4:1 in situ.

At a later date, the aerial was extended by about 28mm, which brought the V.S.W.R. down to 1.2:1 when it was in situ. Having made this adjustment, it was necessary to re-seal the join with some bathroom sealant (see picture), and also clear out the drain hole at the base of the aerial, which had become blocked. The aerial has been in use for nearly two years now, with excellent performance. 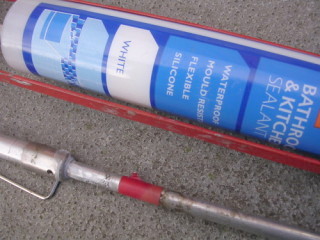 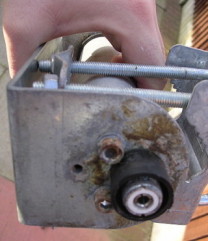 Conclusion
The Sirio appears to be well-designed and manufactured to a very high standard, and offers excellent value for money. Reported signals were about 2 S-points better compared with the Watson WVB-70, but this is after all a longer aerial.

Some weather-related effects were noted: when rain is falling, the VSWR is noted to drop from 1.4:1 to 1.2:1 and this rises at a steady rate after the rain has stopped and after around a hour later is back to 1.4:1.
During one frosty night, when the outside temp fell to -2C, ice could be seen on the lower section of this aerial. The VSWR was then measured at 1.5:1 at a outside temp of -1C, however as the sun melted the ice, the VSWR fell back to a steady 1.4:1.
No such icing effects were noted on the Watson/Moonraker WVB-70, but this uses a fibregalss tube to house the coil, as opposed to the Sirio’s which is alloy.

Special thanks to Dave M3CRV of Northwich for the loan of his aerial during the evaluation period.
I hope you have enjoyed my review. 73 de Ian G6TGO.

For further details of the Sirio range of antennas, please contact Phil of CB37 Communications in Crewe, Cheshire on 01270 588440.